Eddie has lived in the area for 32 years and has Birchwood in his blood having previously owned and ran his own business in Lincoln. He is married and has two daughters.

Eddie was elected to the City of Lincoln Council in 1991 until 1995 and was re-elected in 1998 to date. He serves on various committees including Planning. He also serves on Lincolnshire County Council and was re-elected in 2017 after a four year break. Eddie is currently Chairman of the Lincolnshire Pension Committee and also serves on Highways and Scrutiny committees. He serves the residents of Birchwood on both councils.

He was proud to serve as a member of Her Majesty’s Forces. During a 25-year career in the Royal Engineers as a combat communications instructor. Eddie was heavily involved in sport and became a unit football coach and a Badminton Association of England instructor. On leaving the army he ran a successful independent financial services company for 23 years.

Eddie has seen Birchwood Ward grow tremendously in that time and he feels that, as the area is the equivalent of a good sized town it should have more facilities for its citizens, such as more play areas. He is working closely with residents to enhance facilities in the Birchwood area through Birchwood Big Local of which he is the chairman of the Board.

Eddie has also been appointed as chairman of the Birchwood Area Community Land Trust which aids the Big Local Board with matters of land ownership.

His hobbies, when not involved with politics, include family days out and golf.

Eddie's Ward Surgery details: Life Church, Birchwood Avenue, 10.00 - 11.00 on the last Friday of each month. No appointment is necessary.

Eddie welcomes constituents to get in touch with their concerns and is happy to meet with them to try and resolve their issues.

The questions we will be asking of the Labour-run City Council this evening.

Meet your Councillors at the Lincolnshire Show

At the Lincolnshire Show on Wednesday 19 and Thursday 20 June, you will have the opportunity to sit down with your County Councillors and discuss any local concerns you may have.

June 2019: Message from the Association Chairman 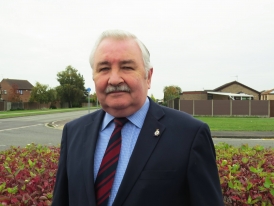