Karl has welcomed additional peak time capacity and improvements to trains and stations that will be introduced following the new franchise agreement for the East Midlands Railway, secured by the Conservative Government today, including Lincoln station.

The Conservative Government has announced that Abellio has been successful in its bid to operate the East Midlands Railway franchise, with a commitment to increase the number of trains and capacity on each train at peak hours and weekends, as well as investing heavily in station improvements.

Passengers in Lincoln will see significantly reduced journey times and an increase in the number of services on this route, as well as enhancements to Lincoln station. This will include an improved waiting area plus retailing on island platform.

There will be extra peak hour capacity across the line, with passengers benefitting from an 80 per cent increase in the number of morning peak seats into and out of Nottingham, Lincoln and London St Pancras every day, better connecting businesses and individuals across the country. There will be 1,211 more seats on trains going into Lincoln every day, an increase of 107 per cent.

This is all part of the Conservatives’ plan to improve connectivity across the country, investing heavily to enhance the transport network for individuals and businesses as well as the service they receive. And the Conservatives are focused on improving the transport network in a sustainable way, delivering a cleaner, greener rail network. As part of this agreement, Abellio will trial hydrogen fuel cell trains on the Midland Main Line and will run zero-carbon pilots at six stations along the route.

Chris Grayling, Secretary of State for Transport, said: “Karl has always passionately campaigned to improve the service provided to passengers in Lincoln who use the East Midlands Railway every day, and I’m delighted that this new agreement will see significantly reduced train journey times as well as vital improvements to Lincoln station.

“It was crucial to select an operator which could not only deliver the service currently required across the East Midlands Railway but could improve this, and I believe Abellio’s plan to increase peak time capacity and the number of trains operated will benefit individuals and businesses across Lincoln.

“As Conservatives we want to make sure the whole country is better connected, and this plan will make it easier and more accessible for people across the East Midlands and beyond to travel.”

Commenting, Karl said: “Today’s announcement is great news for local people in Lincoln who rely on our trains every day to get to work, to visit friends and family, and to travel.

“The Conservatives are committed to improving connectivity across the country and are investing heavily to increase the number of rail services provided and reduce the time it takes passengers to reach their destination. This announcement will ensure this happens, whilst also improving Lincoln station.”

The Conservative Government is investing nearly £48 billion over the next five years to modernise the railway, including more than £1.5 billion to upgrade the Midland Main Line, the biggest upgrade of the line since it was completed in 1870. 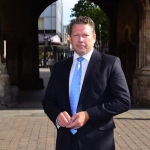